Catalyst is 5 issues old/young and like any person, growing up can be a scary time with many questions and seemingly not enough answers to go around. This issue of Catalyst is brought to you in, and dedicated to, the spirit of Peace. In a time of perpetual war (and Orwellian prophecy come true) Poetry and Art must shoulder it's own perpetual burden - that of speaking truths, opening communication and allowing glimpses into what might be possible if we put down the guns.

The feature poet for Catalyst 5 is US poet and peace advocate Sam Hamill. We quote him in the editorial:

“One thing we as poets can do is build stronger intercultural bridges. The better we know and talk with one another, locally and internationally, the more difficult misunderstanding becomes.”

“Inasmuch as our work demands the reinvention of ourselves, we must also thereby reinvent our country. And the world. Imagine a world without war.”

Sam founded a significant movement called Poets Against War after refusing an invitation to attend a White House function to celebrate "Poetry and the American Voice". As a pacifist, Sam felt he could not in good faith attend in the light of the USA's 'shock and awe' invasion of Iraq and what he sees as poetry's mission to spread international understanding. But instead of merely avoiding a conflict of conscience, Sam called on fellow poets to "reconstitute a Poets Against the War movement like the one organized to speak out against the war in Vietnam...to speak up for the conscience of our country and lend your names to our petition against this war”

The 'accidental groundswell' begun by this has seen the establishment of a website and what is now the largest anthology ever published with more than 20,000 poems from every corner of the Earth represented.

Catalyst 5 has endeavoured to uphold this spirit of peaceful international dialogue with our most international issue to date. From the editorial by Doc Drumheller:

This landmark 5th issue of Catalyst celebrates a United Nations of literature in its many forms. With poet and founder of Poets Against War Sam Hamill as feature writer, a haiku sequence from Ban’ya Natsuishi, the President of the World Haiku Association, a selection of Bengali Poets, including prominent Indian poet Prabal Kumar Basu and a special section of poetry from ten Cuban Poets. All this and work from more international writers, cross pollinated with established and emerging voices from all over New Zealand.

Last year I had the honor and great pleasure of participating in the Third Wellington International Poetry Festival with Sam, Ban’ya, Prabal and a cast of fine and International poets. Experiencing the poets many voices in English and their native tongues was both stimulating and inspiring. The theme for the festival was Disarmament and Peaceful Dialogue. During the four days we heard many powerful, beautiful and at times extraordinary expressions of peace and poetry. One line that stuck with me was from the Irish poet John Deane, when he said the best way to write an anti war poem is to write a love poem.

So on Thursday 21st December, we at Neoismist Press are proud to present our small contribution to Peaceful Dialogue around the world with the range of voices represented in Catalyst 5. Sam Hamill again:

Poetry is an important bridge. Our poetry absolutely blossomed in the last century, in a very large part thanks to the influence of poetry from all over the world. That cross-pollination is essential to us and to our allied poets abroad. We need to know what every "they" have to say. We need to reaffirm ancient values and the practice of compassion. We need to remind people lost in materialist culture that, yes, poetry matters—just as it always has. Maybe even more, because it crosses boundaries more efficiently than ever before.”

Catalyst volume 5: We Come in Peace 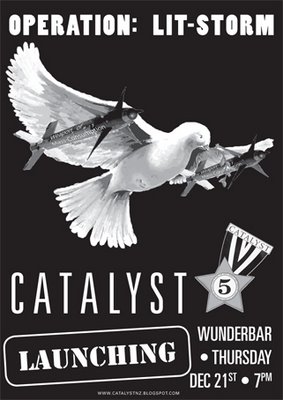 Stay tuned here for sneak previews of Catalyst volume 5, feature articles and other miscellany of an incredibly significant and interesting nature...
Posted by Catalyst at 10:50 pm No comments:

Neoismist Press is unbelievably pleased (not to mention relieved) to announce the official launch date for Catalyst volume 5!

There will be a special launch function at the ever-lovin' Wunderbar in Lyttelton for all those located in the Christchurch vicinity on Thursday 21st December at 7pm. It will feature live readings from several poets and writers featured in this issue as well as the familiar ramblings and mellow tones of Catalyst's two editors Doc Drumheller and Ciaran Fox.

So those details again, all nicely laid out for those of you who hate having to read the whole article just to get to the important details: