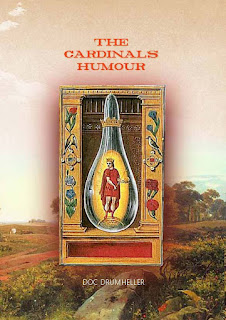 
The next Catalyst night - Tuesday 3rd July - is a bumper night of literary shenanigans.  Not only are we announcing the 'winners' of our first ever 24 Hour Flash competition but we're gonna launch Doc Drumheller's new and possibly most important book to date The Cardinal's Humour.

Join us for a special reading or two from the book and your chance to get yer mitts on a copy before anyone else!

The Cardinal's Humour is Doc's first major collection (excluding haiku), gathering previously published work from across the last decade in one place for the first time.  It is presented with staggeringly creative and beautiful graphic design and art by Gail Anderson.  The Cardinal's Humour is the first release from The Republic of Oma Rapiti Press, with funding assistance by Creative Communities Christchurch.

If you've been following the adventures of Catalyst and Neoismist Press over the years then probably Doc is not an unknown figure to you.  But just in case you're new here or have forgotten just who the hell this guy is... apart from starting up NZ's longest continuously running poetry open mic night, founding Neoismist Press and Catalyst, inventing Poetry Idol and Survivor Poetry, he's also published numerous chapbooks and 3 books of haiku.  So yes, apart from all that:


About the Author:
Doc Drumheller was born in Charleston, South Carolina and has lived in New Zealand for more than half his life. He has worked in award winning groups for theatre and music and has published ten collections of poetry.
In 2007 he participated in the 12th Havana International Poetry Festival, where he was asked to represent New Zealand on the International Board of Poets in Defence of Humanity. In 2009 he participated in the 5th World Haiku Association Conference and The Druskininkai Poetic Fall in Lithuania, where he became the New Zealand Ambassador to the Republic of Užupis. In 2010 he participated in the World Haiku Festival Pécs, Hungary and won first prize in the ginko haiku writing competition.
In 2011 he travelled to India where his book ‘In Transit’, 100 haiku in 11 languages, was published. He performed poetry and music at the Cyberwit office in Allahabad and at the Sahitya Akademi in New Delhi and then went on to represent New Zealand at the 2nd Tokyo International Poetry Festival and 6th World Haiku Association Conference in Japan.
He lives in Oxford, where he edits and publishes the literary journal Catalyst and teaches creative writing at the School for Young Writers.

In the next post this week we'll be featuring an excerpt from the book plus some more of Gail Anderson's stunning art work.  Keep checking in folks!

24 Hour Flashed in the pan 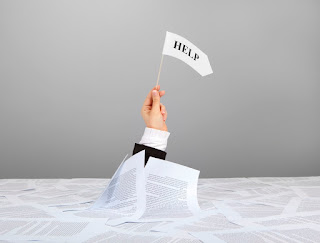 Wow!  A final flash fiction tally of 43 entries!  Congratulations to everyone who put pen to paper, or fingertip to keyboard, whatever, you got yer arse in gear and wrote up a flash storm!  We salute you!

We have decided to announce our picks at the next Catalyst Open Mic which is Tuesday 3rd July, 8pm at the Pegasus Arms upstairs (Vespa Room) so if you want to find out you have to come! (or wait until the next day when we'll post the names here!)
Posted by Catalyst at 7:04 pm No comments:

A weekend dedicated to advancing your writing

drum roll please... the 10 trigger words for the first ever Catalyst Literary Arts Journal 24 Hour Flash are... and remember your story must include ALL ten words, in no particular order, to be eligible and no longer than 250 words in total. Here we go:

On your marks, get set, FLASH.

If you're still reading this post, congratulations! You may have noticed the prompt words are all NOUNS. That's cos we love nouns. The words were selected by Doc Drumheller using the following method: They are all from Catalyst volume 9 - we used the first 10 poets in that volume and chose the first noun from each of their poems. So there yeh go.

In the spirit of flash fiction Hagley Writers Institute have rather speedily got an offical event organized for the day.

Hear tiny stories with a big wallop by Hagley Writers.
Posted by Catalyst at 1:50 pm No comments:

Flash Fiction alert! We're going to carry on up the virtual, so to speak, with our own 24 Hour Flash competition. Just like the Northland NZSA branch version - details here: http://nationalflash.wordpress.com/24-hour-flash/

Stay tuned for 10 prompt words tomorrow - National Flash Fiction Day have offered to publish a selection on their website and we'll do the same on www.catalystnz.blogspot.com

To enter you must include the 10 prompt words announced tomorrow in your story (or stories!) and email it to us.

If we find a place to hang out we may even have some live performance from those of you in ChCh. Otherwise they can be shared at the next Catalyst poetry open mic on 3rd July.
Posted by Catalyst at 1:33 pm No comments: 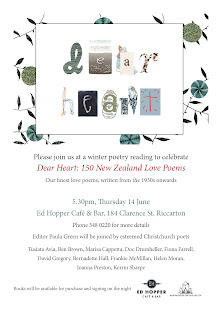 Join our very own Doc Drumheller along with a veritable smorgasboard of Christchurch poetic talent to help launch the new collection Dear Heart - 150 New Zealand Love Poems, an anthology of 'our finest love poems, written from the 1930's onwards'.   Here's a link to a review in the NZ Herald.

Posted by Catalyst at 7:47 pm No comments: 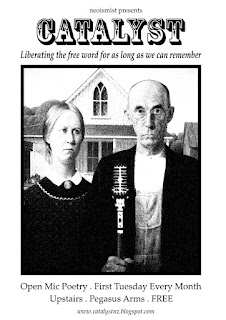