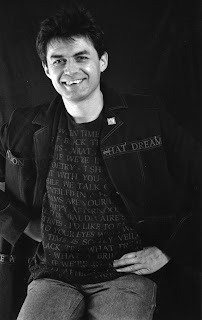 The next Catalyst Poetry Open Mic has a special guest feature poet, none other than David Eggleton.

David has been making a habit of visiting the Garden City of late with appearances at The Press Christchurch Writers Festival in 'Poetry for Lunch' (he was also one of our guest judges for Survivor: Poetry) and a recent guest turn at the Canterbury Poets Collective Spring series of readings.

Next week he's our feature poet at the regular Catalyst open mic upstairs at the Pegasus Arms (Vespa Room).  Be there!

If you have yourself a copy of our latest issue - Catalyst volume 9 Export Quality - you will have heard David's distinctive delivery as he performs his poem 'Taranaki Bitter'.  Certainly one of NZ's foremost performance poets and writers - I've seen the word 'mesmeric' used in more than one online reference - here's a taste to get you going!

Here's a bit more about David:

Posted by Catalyst at 4:52 pm No comments: