“…One of the stellar voices of the spoken word scene with his outrageous, bawdy, sensuous stories and vibrant political satire.”

Namaya has performed in leading venues, universities, and clubs in New York and throughout the US since the l970’s.He has been a featured poet at the leading clubs in NYC - Nuyorican Cafe and Bowery Poetry Club, as well as with venues and colleges in the East Coast as a solo artist and with his band the Jazz Beat Blues Poetry Ensemble. He has been published in numerous magazines and has two collections of poetry to his credit: Eros to Godhead and the most recently published GOD SEX POLITICS.
Video and sound samples can be found at www.jazzbeatblues.com and www.vermontpoet.com.
Namaya & Jazz Beats completed a successful tour of Denmark, Holland, and England at the end of 2005. In 2006 he is taking his GOD SEX POLITICS solo show to various locations throughout the US, including NYC, and internationally to Ireland, Japan, & New Zealand. GOD SEX POLITICS is a mix of political satire, music and video: Amerika Uber Alles; Men of Enron; a bit of love/lust with Necrophilia Blue and Love Junkie; Land Mine Hop; Jazz Detective story, and a mix of other politically incorrect and wry works. Often the audience is astonished and bemused, but delighted. The show is a mix of music, guitar, improvisation and story telling.
Posted by Catalyst at 11:09 am 2 comments:

Next open mic for all you live poetry junkies:


P.S. Stay tuned for Catalyst 5 book launch - now scheduled for November 10 at the good ol' Wunderbar!
Posted by Catalyst at 1:27 pm No comments: 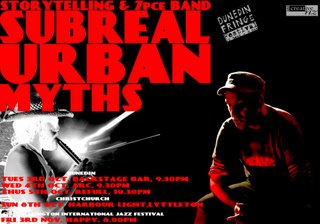 A.J. Coyle returns with more mythology from the male psyche. On tour in October, appearing at the Dunedin Fringe Festival and a special hometown show at the Harbourlight Theatre in Lyttelton on Sunday 8th October, 8pm.

Story telling and live music at the Dunedin Fringe Festival 2006. SUBREAL URBAN MYTHS is a collaboration between writer and story tellerAndrew Coyle, and the "Discontent" band assembled by younger brother James Coyle. Possesion, ambition, fear / fearlessness, intuition and Power are the generators of 5 male characters in Andrews latest creation for SUBREAL URBAN MYTHS.

"They are stories from under the surface of true life, concentrating on control and personality crystalised in any given thought or gesture, action or reaction" says Andrew citing influences such as David Lynch and William Burroughs in his subreallist storytelling, a concept for live performances he has been working on for four years. The Subreal element is born from improvisations adjacent to the narrative. "Living and writing in Christchurch means I can walk the streets in mystories, pulling out images and faces, tones and feelings." Perfoming with a full live band will embellish and challenge the moods and tone of Andrew's stories, "The intracacies of the sound-track will be improvised, at one moment building to a gut wrenching driving and dissonant industrial ambition and the next moment resolving with a simplistic groove based urban rapture."

The "Discontent" Band are seven Wellington musicians involved in numerous other projects, and are coming together for this event in Dunedin. SUBREAL URBAN MYTHS will be performed over three nights at three differentvenues.