A big thank you to our wonderful audience at the Grand Final of Survivor: Poetry 2010 for helping us raise $250 for the Canterbury Earthquake recovery effort. We'll be placing this donation with the Kiwibank/Red Cross Relief Fund.

Posted by Catalyst at 8:57 am No comments: 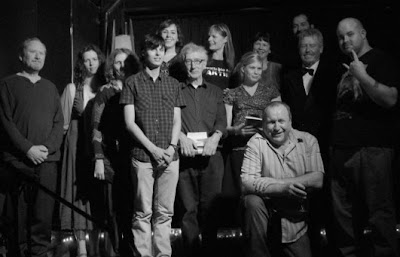 Well the dust has settled over the stage at Al's Bar and the castaways have drifted back towards their respective homes. The world's first Survivor: Poetry was dropped on an only mildly prepared audience on November 3rd. The result was hilarity, drama, Leonard Cohen tributes, earthquake metaphors and believe it or not - poetry.

Amongst the fiendish challenges and heart-breaking Tribal Councils the poets managed to create some genuinely clever, funny and moving moments as one by one, they were eliminated or voted off by the tribe of castaways. There were team challenges and spontaneous haiku tie-breakers along with cameos from our wonderful judges and Ciaran's ham performance as the cruel MC himself.

Alas it came down to two as the cadre of previously eliminated castaways returned to pick the overall winner and inaugural Survivor: Poetry. In a satisfyingly dramatic and apt final act, the jury of eleven peers voted 6-5 for the eventual winner Sean Joyce. The runner-up was Micah Timona Ferris and the two faced the agonisingly slow reveal of the voting result (thanks, Ciaran) standing hand in hand.

Outstanding audience members had their reward and it was an exhausted but elated group of poets that left (or stayed at the bar) later that night, blessed by the spirit of Leonard Cohen I'm sure...
Posted by Catalyst at 1:20 pm No comments: