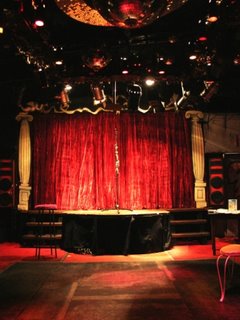 We LOVE books. We really do, and not in a sick, perverted way either, so we're proud to support the brand, spanking new NZ Book Month which runs from September 18th to October 15th.

Modelled on the highly successful NZ Music Month which has helped markedly increase the sales of homegrown NZ music, the Book Month version is spearheaded by Booksellers NZ.

We want to celebrate and showcase the brilliant writing talent we have, to support new and upcoming writers in our country, to tap into the pride we feel in our literary landscape and show you that whatever your taste, there’s a fantastic New Zealand book for you. We envisage NZ Book Month to be an annual event, which will grow over time to be a nation-wide festival involving everyone from local communities to the Prime Minister.

We've added a link to the official NZ Book Month website so check it out to see what kind of events are planned and happening all around these shaky isles to celebrate this wonderfully archaic form of mass communication we call books. Actual paper n' stuff, quaint eh?

P.S. We're doing our bit to celebrate NZ books too - by making one! Catalyst 5 is scheduled for release in late October. Showcasing amazing writing and art from around New Zealand and the entire world and published right here in Aotearoa.
Posted by Catalyst at 9:21 pm No comments:

As part of the Christchurch Writers Festival 2006, a biannual event sponsored by The Press, a special one-night-only Poetry Idol event was held.

Riding the surge in interest in performance poetry the 'Festival Idol' was held upstairs in the De Lux Lounge at the Dux de Lux in Christchurch's Arts Centre on Sunday 10th September.

This event differed in format from the annual Poetry Idol that Catalyst hosts at the Wunderbar in that it would be run over three rounds in the one night. 12 poets to be judged by special guest judges would diminish to just 3 in the final round to be judged solely by the audience.

A preliminary workshop/audition was held on the Saturday by host Hot Pink, NZ's internationally recognised comic poet, to whittle the 25 entrants down to the starting dozen.

The all-important judging panel consisted of Iggy McGovern, Ishle Yi Park and our very own Doc Drumheller. The judges were instructed by MC Hot Pink to make 'positive' comments on each of the poet's performances. So Kiwi.

The 'wordy dozen' was as varied as the poetry on offer - the eldest contestant was 91, the youngest in their 20's. The poets performed one poem per round only and were given a 3 minute time limit - 'overstayers' would be cut-off, mid-metaphor. The running order was drawn from a hat. Poetry ensued.

From bush ballads to rap to rugby the poets ran the gamut from angst to rhyme to scatological musings. Heart break, husbands and horrendous body odour. The packed-out De Lux Lounge was left reeling by the end of the 1st round. Several poets were let down by their seeming aversion to the microphone - either by accident or design - it was a mistake as being heard by the audience is kinda the idea when performing spoken word. (We at Catalyst pride ourselves on providing poets with valuable "on-mic' experience & training at our regular open mics, but enough about that!)

Following each round the audience were to be treated to some exhibition performances by the extremely experienced judges. Round 1 saw Doc Drumheller serve up some "Peace a la Carte" with a little side salad from forthcoming book The Reality Myth.

And then the dozen was halved. The six remaining poets were announced by Hot Pink and the order for the next round drawn from a hat. Seemingly age was beating beauty, but only just as the 6 performed their next poems. The judges came in for some unexpected interaction and the audience started to work out their favourites...

Ishle Yi Park stunned the audience with an incredible performance of one of her pieces and was given a rapturous ovation. Next, our hard-working MC announced the final 3 poets who were to progress to the final, audience-judged round. Pleasing from our point of view, two of the finalists were previous Catalyst Poetry Idols - Lindon 'Zimmerman' McCormack and Cris Fulton. The third poet was Colin 'Banjo' Patterson. So it was to be country limericking versus super fast Scottish wit versus wistful yet funny lyricism. The audience made their choice by pencil and slip of paper and as the organisers counted the vote, Iggy McGovern described Irish poetry slams in humourously dubious rhyme.

Hot Pink at last took the microphone to announce the placings to an enthusiatic audience who stayed the distance and seemed to enjoy every minute. And the winner is:

1st place: Colin Patterson
2nd place: Lindon Zimmerman
3rd place: Cris Fulton
The prizes included cash and also hospitality vouchers from the Dux de Lux as well as books from Catalyst and Iggy McGovern.
In the words of some great bard: ah, it was a game of three halves and poetry was definitely up there at the end of the day...
Posted by Catalyst at 11:05 am No comments: 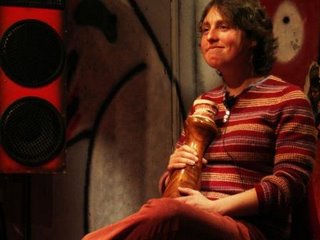 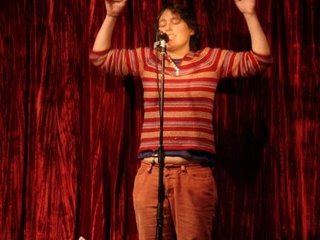 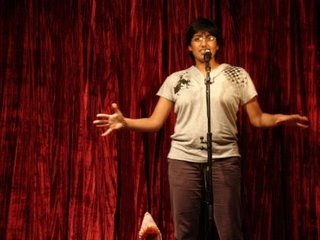 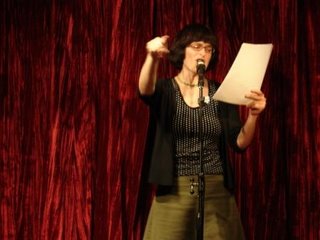 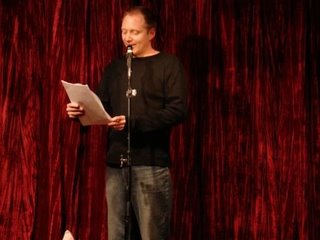 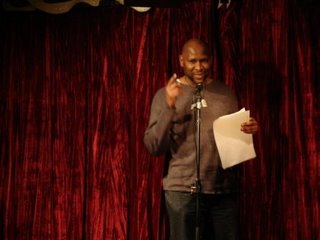 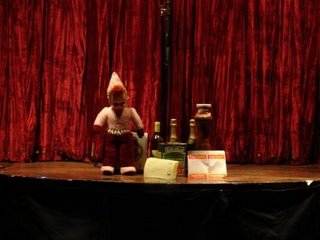