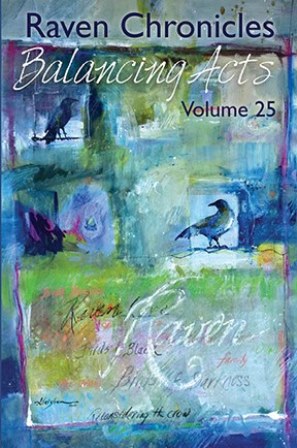 Raven Chronicles is a journal of art, literature and spoken word, published in Seattle, USA. With a very similar focus to Catalyst, it seemed a natural pair to collaborate under the Sister Cities programme between Christchurch and Seattle.

A launch event was held last month in Seattle for volume 25 of Raven Chronicles 'Balancing Acts' - this follows the launch of Catalyst volume 13 'Instant Chemistry' in November last year, the first leg of the collaboration.

The next Catalyst Open Mic Night will feature a reading from the selection of Christchurch poets published in the Raven Chronicles Volume 25, 'Balancing Acts' feature. Come celebrate this unique cultural exchange that included a selection of Seattle poets and writers published in Catalyst Volume 13 'Instant Chemistry'.  With readings from their selection of work:  Frankie McMillan, Erik Kennedy, Heather McQuillan, Doc Drumheller, and Fiona Farrell.

We are pleased to present the work of a selection of established and emerging writers from New Zealand as part of the Sister Cities Program, a collaboration between Seattle and Christchurch, New Zealand.

The editors of Raven Chronicles, A Journal of Art, Literature & The Spoken Word, are pleased to announce their nominations for the 2018 Pushcart Prize: Best of the Small Presses series, the prize chosen by Pushcart Press that anthologizes the best of the small presses publishing this year. The editors of Raven Chronicles nominate the following writers for their work published in Vol. 24 and Vol. 25, in 2017.

For more information: Raven Chronicles
Posted by Catalyst at 8:29 pm No comments: